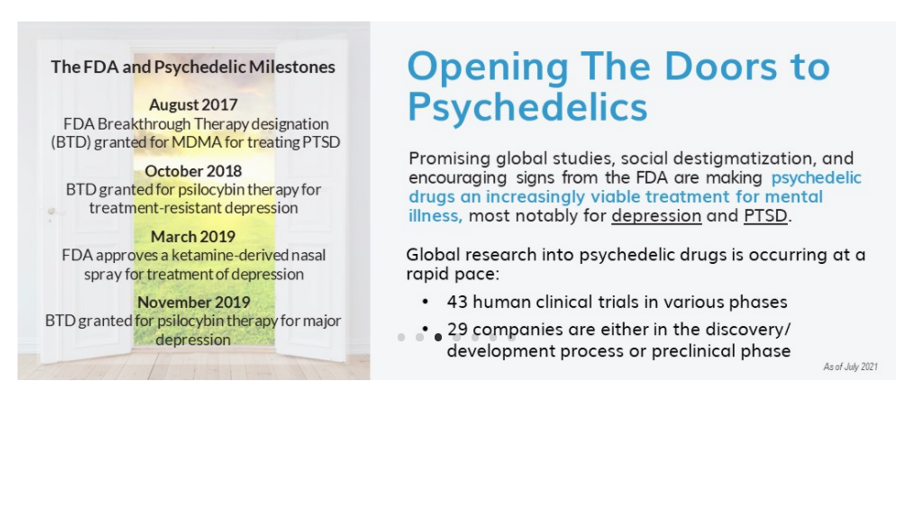 The AdvisorShares Psychedelics ETF (NYSE ticker: PSIL) invests in the emerging psychedelic drugs sector, offering exposure to those biotechnology, pharmaceutical and life sciences companies we see as leading the way in this nascent industry. Ongoing and growing research has shown various psychedelic substances offering promising medical and therapeutic potential for treating mental health issues and neurological disorders. PSIL concentrates its portfolio on companies deriving the majority of their net revenue or devoting the majority of their assets to psychedelic drugs.

Note – Due to custody limitations, investment exposure to OTC and foreign listed stocks may be via swap contracts. As a result, the ETF may have a larger than normal cash position as some cash may be held as collateral for the swaps.

Before investing you should carefully consider the Fund’s investment objectives, risks, charges and expenses. This and other information is in the prospectus, a copy of which may be obtained by visiting the Fund’s website at www.AdvisorShares.com. Please read the prospectus carefully before you invest. Foreside Fund Services, LLC, Distributor.

There is no guarantee that the Fund will achieve its investment objective. An investment in the Fund is subject to risk, including the possible loss of principal amount invested.

Psychedelics Companies Risk. Psychedelics companies are subject to various laws and regulations that may differ at the state/local and federal level. These laws and regulations may significantly affect a psychedelics company’s ability to secure financing, impact the market for psychedelics and business sales and services, and set limitations on psychedelics use, production, transportation, and storage. There can be no guarantees that such approvals or administrative actions will happen or be favorable for psychedelics companies, and such actions may be subject to lengthy delays, and may require length and expensive clinical trials. Additionally, therapies containing controlled substances may generate public controversy. Political and social pressures and adverse publicity could lead to delays in approval of, and increased expenses for, companies and any future therapeutic candidates they may develop. All of these factors and others may prevent psychedelics companies from becoming profitable, which may materially affect the value of certain Fund investments. In addition, psychedelics are subject to the risks associated with the biotechnology and pharmaceutical industries.

In the United States, scheduling determinations by the Drug Enforcement Agency (“DEA”) are dependent on Food and Drug Administration (“FDA”) approval of a substance or a specific formulation of a substance. Unless and until psilocybin, psilocin, or other psychedelics-based products receive FDA approval, such products may be prohibited from sale, which could limit the growth opportunities for certain portfolio companies of the Fund. Even if approved by the FDA, the manufacture, importation, exportation, domestic distribution, storage, sale, and legitimate use of such products will continue to be subject to a significant degree of regulation by the DEA.