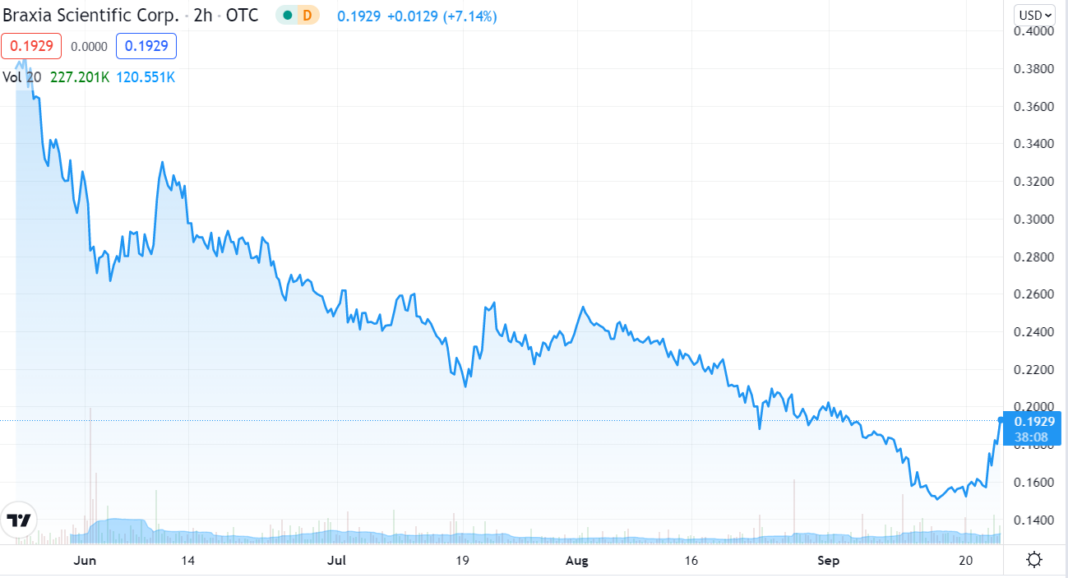 TORONTO, Aug. 30, 2021 /CNW/ – Braxia Scientific Corp. (“Braxia Scientific,” or the “Company”), (CSE: BRAX) (OTC: BRAXF) (FWB: 496), a medical research company with clinics providing innovative ketamine treatments for persons with depression and related disorders, today announced the filing of its fiscal first-quarter results for the three-month period ending June 30, 2021. Complete financial statements along with related management discussion and analysis can be found in the System for Electronic Document Analysis and Retrieval (SEDAR), the electronic filing system for the disclosure documents of issuers across Canada, at www.SEDAR.com.

With its leading researchers and experienced implementation team, Braxia Scientific continues to focus on its three strategic priorities: (i) expand its footprint of multidisciplinary clinics providing IV Ketamine for mental health disorders, (ii) identify new, IP-capable ketamine and psychedelic derivatives, as well as novel delivery systems, and to capitalize on new formulations by implementing them within Braxia Health’s clinical settings, and (iii) train new clinicians through the Braxia Institute to administer psychedelic-assisted therapy based on the International Guidelines published by Braxia Scientific Leadership.

Through its vertically integrated model, Braxia Scientific is differentiated by way of its capability to achieve a shortened research and development timeline that, along with the track record and relationships already established by the Company’s leadership, will enable partnerships with large pharmaceutical companies.

“As one of very few clinics offering IV Ketamine therapy in Canada since 2018, and the first private IV Ketamine clinic in Quebec, we have set the standard in care through our protocols and team of psychiatrists and nurses. As a result, we are pleased to be accepting an increasing number of referrals for patients with depression in need of rapid-acting and effective treatments,” said Dr. Roger McIntyre, CEO of Braxia Scientific.

“In addition to our clinics, we are executing on our strategy to test out innovative formulations and delivery methods. We are working to achieve key milestone objectives such as demonstrating the proof of mechanism, and that they actually affect the brain and attenuate depression – which has a one- to two-year runway.

“We are in discussions with major drug manufacturers as to how we can move the needle for ketamine and psychedelic derivatives, with a view to refining our therapeutic research priorities in developing new products that could be ultimately acquired by large pharma.”

Increasing Patient Volume: Braxia Scientific, through its four multidisciplinary, community-based Canadian clinics, operating as Braxia Health, continued to see increased patient volume, exceeding its IV ketamine infusion targets every month since January 2021. These results partially reflect increased treatments from its newest clinic in Montreal, which has ramped up operations since the Company, in conjunction with its joint venture partner, Neurotherapy Montreal, successfully opened March 31, 2021. This new location, which is the first to offer novel Ketamine therapy, including intravenous therapy, to patients in a private clinical setting in Quebec, required eight (8) weeks, from initial resource deployment to the first patient visit, to become operational, including all necessary education and training.

In August 2021, the Company announced it would commence a landmark clinical trial to conduct Canada’s first multiple-dose psilocybin study for treatment-resistant depression (TRD). Whereas most other TRD studies limit participation to patients that have not found relief from a maximum of five other potential remedies, Braxia Scientific’s research will not have an upper limit, and will even include patients that have endured dozens of unsuccessful medical trials, including ketamine and electroconvulsive therapy.

The Company is confident that the study will demonstrate that the Company can effectively conduct a randomized controlled trial using psychedelic-assisted therapy. This will enable the Company to build the infrastructure for future studies and future clinical care, while also compiling efficacy data and providing the opportunity to evaluate the therapist training program launched at the end of June 2021.

This program run by the Braxia Institute, the Company’s training centre focused on advancing psychiatric clinical practice and health services of ketamine and psychedelic treatment therapy, has already cultivated a multi-disciplinary group of 20 therapists from diverse psychiatry and psychotherapy backgrounds to implement safe and effective psilocybin-assisted therapy for patients with depression.

In June 2021, the Company announced that Chief Medical and Scientific Officer Dr. Joshua Rosenblat will initiate a first-of-its-kind ketamine clinical trial to treat bipolar depression. The fully funded study represents the largest registered trial of its kind in the world, and will investigate the use, safety and efficacy of repeated doses of IV ketamine in patients with bipolar depression. This trial will enable Braxia-led research teams to further advance studies of IV ketamine to support its approval as a safe, effective and rapid-acting alternative treatment for patients with bipolar depression.

Braxia Scientific’s research and development team continued to execute on several research initiatives during the quarter, achieving several key milestones, including completing a study evaluating genetic predictors of how patients may respond to ketamine, as well as continuing to develop a new topical ketamine formulation and intranasal ketamine product.

The Company was pleased to announce the publication of the International Expert Opinion and Implementation Guidance (the “Guidelines”) for the clinical use of rapid-acting Ketamine and Esketamine for treatment-resistant depression (TRD) in the American Journal of Psychiatry. The Guidelines were developed by Dr. McIntyre and Dr. Rosenblat, along with an international group of 26 medical experts across five continents, establishing Braxia Scientific as an international leader in the rapidly evolving industry of Ketamine, Esketamine and rapid-acting antidepressants.

The Company also launched the Braxia Institute, a training centre focused on advancing psychiatric clinical practice and health services of ketamine and psychedelic treatment therapy for people with treatment-resistant depression and other possible mental health disorders. Through its research-backed training programs, the Braxia Institute is focused on advancing the knowledge base of psychiatrists, physicians and other health-care professionals globally, closing the extraordinary gap between clinical practice groups around the world and the protocols, competencies and best practices identified through peer-reviewed published research.

The Braxia Institute opened enrollment to develop, train, and support a new generation of qualified, independent medical physicians, psychologists, and psychotherapists to implement safe and effective psilocybin-assisted therapy for patients with depression. The therapists will participate in the provision of psychotherapy in upcoming clinical trials at Braxia Health clinics, evaluating the safety and efficacy of psilocybin in treating depression. The Company anticipates that, pending regulatory approval of psilocybin, therapists would also be trained to implement psychedelics in clinical practice.

Revenues consisted primarily of sales revenue from the administering of ketamine infusion treatments at the CRTCE clinics in Ontario and Quebec.

As a percentage of total revenue, gross margin was approximately 28.1%, an increase of 139 basis points, when compared with the previous year’s corresponding period.

“Braxia Scientific remains steadfastly focused on addressing the public health imperative to identify scalable solutions for attenuating depression and other brain-based disorders to improve the health and well-being of Canadians and people around the world,” said Dr. McIntyre.

“We believe the federal funding received by our senior team members speaks to our superior human capital, as well as our personnel’s long, successful track record of quality research and development. As we seek to expand our network of clinics, particularly into the United States, we look forward to implementing their findings, carrying out several clinical trials, the majority of which will be funded by third parties.”

Braxia Scientific is a medical research company with clinics that provide innovative ketamine treatments for persons with depression and related disorders. Through its medical solutions, Braxia aims to reduce the illness burden of brain-based mental disorders such as major depressive disorder among others. Braxia is primarily focused on (i) owning and operating multidisciplinary clinics, providing treatment for mental health disorders, and (ii) research activities related to discovering and commercializing novel drugs and delivery methods. Braxia seeks to develop ketamine and derivatives and other psychedelic products from its IP development platform. Through its wholly owned subsidiary, the Canadian Rapid Treatment Center of Excellence Inc., Braxia currently operates multidisciplinary community-based clinics offering rapid-acting treatments for depression located in Mississauga, Toronto, Ottawa, and Montreal.

ON BEHALF OF THE BOARD

The CSE has not reviewed and does not accept responsibility for the accuracy or adequacy of this release.

Forward-looking statements include statements about the intended promise of ketamine-based treatments for depression and the potential for ketamine to treat other emerging psychiatric disorders, such as Bipolar Depression. Such forward- looking statements involve known and unknown risks, uncertainties and other factors that may cause actual results, events, or developments to be materially different from any future results, events or developments expressed or implied by such forward-looking statements. Such risks and uncertainties include, among others, the failure of ketamine, psilocybin and other psychedelics to provide the expected health benefits and unanticipated side effects, dependence on obtaining and maintaining regulatory approvals, including acquiring and renewing federal, provincial, municipal, local or other licenses and engaging in activities that could be later determined to be illegal under domestic or international laws. Ketamine and psilocybin are currently Schedule I and Schedule III controlled substances, respectively, under the Controlled Drugs and Substances Act, S.C. 1996, c. 19 (the “CDSA”) and it is a criminal offence to possess such substances under the CDSA without a prescription or a legal exemption. Health Canada has not approved psilocybin as a drug for any indication, however ketamine is a legally permissible medication for the treatment of certain psychological conditions. It is illegal to possess such substances in Canada without a prescription.
These factors should be considered carefully, and readers are cautioned not to place undue reliance on such forward-looking statements.

Although the Company has attempted to identify important risk factors that could cause actual actions, events or results to differ materially from those described in forward-looking statements, there may be other risk factors that cause actions, events or results to differ from those anticipated, estimated or intended. Additional information identifying risks and uncertainties that could affect financial results is contained in the Company’s filings with Canadian securities regulators, including the Amended and Restated Listing Statement dated April 15, 2021, which are available at www.sedar.com. There can be no assurance that forward-looking statements will prove to be accurate, as actual results and future events could differ materially from those anticipated in forward-looking statements.