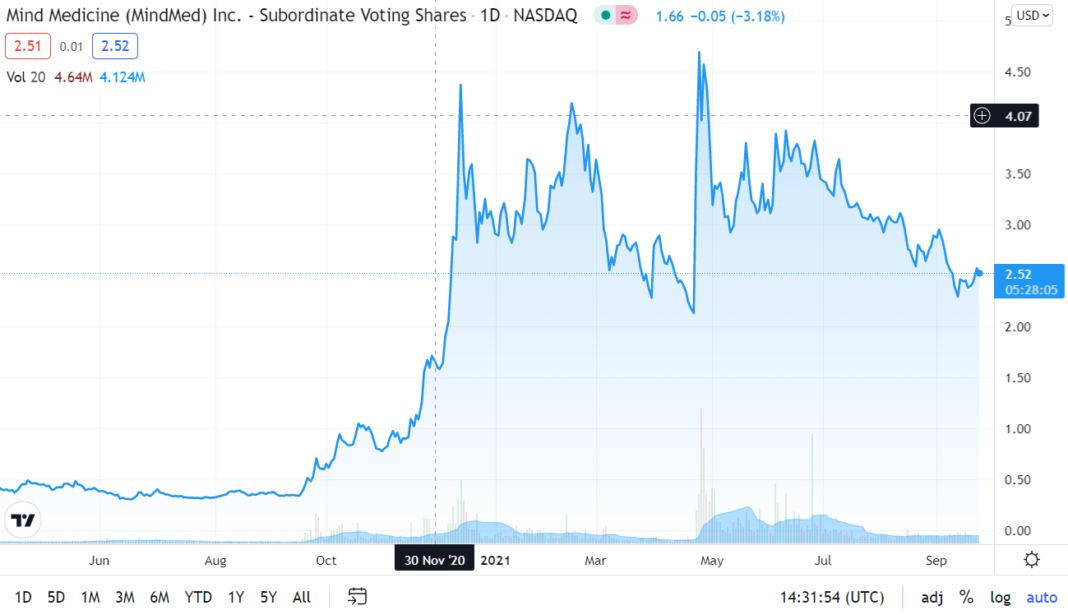 Novel findings presented by the UHB Liechti Lab include:

“While both LSD and psilocybin have a long history in psychiatric research, psilocybin is being studied in a majority of ongoing clinical trials of psychedelics,” said Dr. Liechti. “It is important for us to understand the acute effect characteristics of different psychedelics, and to understand how these substances interact with other treatments like antidepressants. We look forward to fully analyzing the exciting data produced by these studies and publishing our findings later this year.”https://s.yimg.com/rq/darla/4-9-0/html/r-sf-flx.html

MindMed CEO Robert Barrow said, “Investors and researchers alike are eager to understand the similarities between psilocybin and LSD. Learning how these substances compare and interact with other drugs helps us ensure that our treatment programs are as effective and efficient as possible.”

MindMed Executive President, Dr. Miri Halperin Wernli said, “The psychedelic experience can be conceptualized as the facilitated transforming encounter between one’s fears and longings with the universe and its network of living processes. This work with Professor Liechti, indicating for example that genetic polymorphisms of CYP2D6 significantly influence the pharmacokinetic and subjective effects of LSD, is an illustration that biological and psychological transformation processes may be deeply interwoven. When LSD is the chosen key to open an opportunity for psycho-transformation and growth, individual parameters such as one’s own metabolization and bio-transformation rhythm have to be carefully understood and taken into consideration in order to allow the transformative effect to happen in the most powerful and safe manner.”

MindMed is a clinical-stage psychedelic medicine biotech company that seeks to discover, develop and deploy psychedelic-inspired medicines and therapies to address addiction and mental illness. The Company is assembling a compelling drug development pipeline of innovative treatments based on psychedelic substances including psilocybin, LSD, MDMA, DMT and an Ibogaine derivative, 18-MC. The MindMed executive team brings extensive biopharmaceutical experience to MindMed’s approach to developing the next generation of psychedelic-inspired medicines and therapies.

Certain statements in this news release related to the Company constitute “forward-looking information” within the meaning of applicable securities laws and are prospective in nature. Forward-looking information is not based on historical facts, but rather on current expectations and projections about future events and are therefore subject to risks and uncertainties which could cause actual results to differ materially from the future results expressed or implied by the forward-looking statements. These statements generally can be identified by the use of forward-looking words such as “will”, “may”, “should”, “could”, “intend”, “estimate”, “plan”, “anticipate”, “expect”, “believe”, “potential” or “continue”, or the negative thereof or similar variations. Forward-looking information in this news release include, but are not limited to, statements regarding the analysis of the data produced by studies relating to LSD and psilocybin and the publication and timing of publication of related findings. Although the Company believes that the expectations reflected in such forward-looking information are reasonable, such information involves risks and uncertainties, and undue reliance should not be placed on such information, as unknown or unpredictable factors could have material adverse effects on future results, performance or achievements of the Company. There are numerous risks and uncertainties that could cause actual results and the Company’s plans and objectives to differ materially from those expressed in the forward-looking information, including history of negative cash flows; limited operating history; incurrence of future losses; availability of additional capital; lack of product revenue; compliance with laws and regulations; difficulty associated with research and development; risks associated with clinical trials or studies; heightened regulatory scrutiny; early stage product development; clinical trial risks; regulatory approval processes; novelty of the psychedelic inspired medicines industry; as well as those risk factors discussed or referred to herein and the risks described under the headings “Risk Factors” in the Company’s filings with the securities regulatory authorities in all provinces and territories of Canada which are available under the Company’s profile on SEDAR at www.sedar.com and with the U.S. Securities and Exchange Commission on EDGAR at www.sec.gov. Should one or more of these risks or uncertainties materialize, or should assumptions underlying the forward-looking information prove incorrect, actual results and future events could differ materially from those anticipated in such information. Although the Company has attempted to identify important risks, uncertainties and factors that could cause actual results to differ materially, there may be others that cause results not to be as anticipated, estimated or intended. These and all subsequent written and oral forward-looking information are based on estimates and opinions of management on the dates they are made and are expressly qualified in their entirety by this notice. Except as required by law, the Company does not intend and does not assume any obligation to update this forward-looking information.