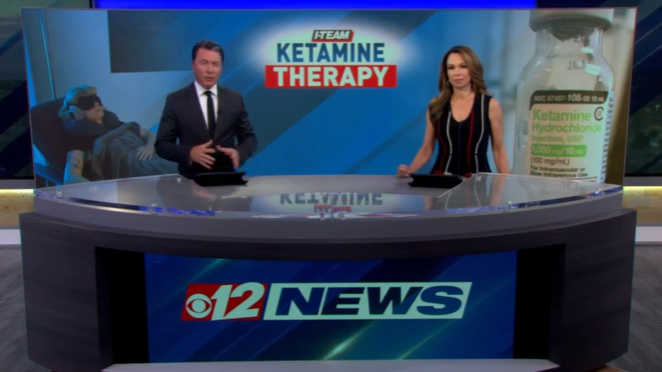 MIAMI BEACH, Fla. (CBS12) — Last month, the CBS12 News I-Team reported on the push to legalize magic mushrooms for therapeutic use in Florida. There’s a growing body of research that suggests the mushroom’s hallucinogenic compound, psilocybin, can effectively treat mental illnesses like major depression and PTSD in psychedelic therapy sessions.

A vial of Ketamine, the only psychedelic drug that is legal in the United States (WPEC).

Right now, there is just one psychedelic drug that is legal in the United States: Ketamine. On the streets, it’s known as Special K, and it’s been abused as a party drug and even as a date-rape drug.

But in controlled settings, like doctor’s offices, Ketamine is being used to treat major depression and acute suicidal ideation.

The I-Team got rare access inside one of these Ketamine therapy sessions at Tristar Wellness in Miami Beach, where Dr. Jeffrey Kamlet counsels patients, oversees their infusion of Ketamine, and guides their therapy.

We were invited to observe a Ketamine session with Jacque O’Rourke, a Miami woman in her 30s.

“I’ve been fighting sadness and depression my entire life,” she said. “For almost two years, I was on every kind of antidepressant you could be on, trying to find one that worked with me. Trying higher doses, lower doses. It was a long couple years and I said I’ll either be depressed for the rest of my life or I’m going to find a way to get out of this and enjoy this life.”

O’Rourke has never experimented with drugs before, so the idea of trying Ketamine therapy at first seemed “really out there,” she said. But a trusted friend who had a positive experience with it recommended Jacque give it a try.